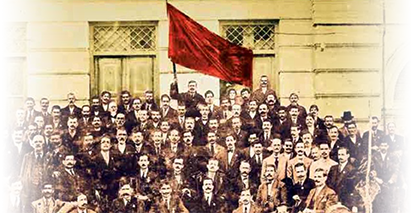 Instructions on how to move around due to the coronavirus

A kick off meeting to organisations that will implement projects in the migration field took place on Monday 4, February 2019.  AMIF is one among them.

More than 200 people attended the meeting and Commissioner Avramopoulos delivered a speech, where LABOUR-INT was mentioned as a good practice.

Please find the link to his speech, which also touches upon important messages to change the narrative on migration.

Here is also the video realised to promote LABOUR-INT project.

On International Migrants Day, EKA together with trade unions across Europe, supports the initiative for solidarity with migrants by backing the first European Citizens’ Initiative (ECI) on migration.

“We are totally opposed to criminalising those who offer humanitarian assistance to migrants” said Luca Visentini, ETUC Secretary General. “The authorities should applaud and support those who help refugees fleeing life-threatening conflict. The Citizens Initiative rightly defends solidarity, respect for human rights and safeguards for people’s lives. These are the values that unions support on the International Migrants Day and every day.”

The ECI is officially supported by the ETUC and hundreds of trade unions and civil society organisations in Europe that have joined forces to engage European citizens in transforming the EU’s migration policies and empowering a #WelcomingEurope.

If 1 million EU citizens across 7 Member States sign the initiative, the European Commission will be obliged to respond to the following demands:

For more information about the campaign #WelcomingEurope please visit weareawelcomingeurope.eu.

Athens Labor Unions' Organisation (EKA) supports the European Citizens’ Initiative (ECI) on migration #WelcomingEurope which has been recently launched and supported by the TU.

Through this initiative the ETUC is calling the European Commission to:

The ECI campaign has already been launched in several European countries, including France, Italy, Belgium, Luxembourg, Greece, Bulgaria, Austria, Romania, Hungary, Slovenia, Slovakia, the Netherlands and Finland. More than 200 civil society organisations across Europe, including ETUC members, have joined forces to mobilise our supporters and to empower a #WelcomingEurope and reclaim citizens’ right to help migrants and refugees.

The campaign is making significant progress; national coalitions have been created in 17 countries with backing of well-known public figures such as Emma Bonino, Anna Terrón.

A significant number of MEPs have also co-signed a joint statement to support the campaign.

"We strongly believe that trade unions - which are at the forefront of human rights protection and advocating for the implementation of progressive and inclusive EU migration policies - would be extremely helpful to reach a wider audience and get the 1 million signatures to create a concrete change and foster citizens-action in the EU migration policy….. We strongly encourage you to engage in supporting the initiative by collecting signatures and spreading information on its objectives." Liina Carr, Confederal Secretary of ETUC.

Please visit the official website of the campaign for more information : https://weareawelcomingeurope.eu/

The Migrant Point EKA of Athens Labor Unions’ Organization in collaboration with Generation 2.0 for Rights, Equality and Diversity and International Rescue Committee provided two workshops regarding the access to the Greek Labor Market and the labor and social rights of refugees, asylum seekers and migrants residing in Greece. The workshops took place on May 30th, Wednesday, and 31st of May, Thursday at the premises of Generation 2.0. The workshops were held in English language with interpretation in Arabic on Wednesday, and in Farsi on Thursday.

The workshop took place within the framework of the Information Services, Counseling Workers and the Unemployed Network, an initiative of the GSEE Institute of Labor, which aims at informing, informing and consulting employees and the unemployed with emphasis and priority in the areas of social security, industrial relations and employment. http://www.ergasiaine.gr/

"Labor, Social and TU Rights of Refugees in Greece"

The Migrant Point EKA held a workshop on the integration of women refugees into the labor market on 3/5/2018, entitled "Labor, Social and TU Rights of Refugees in Greece" at the Intercultural and Educational Center of the Greek Council for Refugees, ”Compass".

The workshop focused on the information and education of women on issues related to labor legislation, social and labor rights of the refugees, asylum seekers and recognized refugees in the country, as well as opportunities for job search and equal integration into the Greek labor market.

The participants were unemployed female refugees aged 30-45 who are in the process of joining the Greek labor market. The seminar was conducted in English with simultaneous translation into the Greek language.

The workshop took place within the framework of the Information Services, Counseling Workers and the Unemployed Network, an initiative of the GSEE Institute of Labor, which aims at informing, informing and consulting employees and the unemployed with emphasis and priority in the areas of social security, industrial relations and employment. http://www.ergasiaine.gr/

Event "We Live Together - We Work Together"

On Friday, March 23, 2018, the Migrant Point EKA participated in the event "We Live together - We Work Together" an initiative of the Working Group "Skills Development and Empowerment through Livelihoods" of the Athens Coordination Center for Migrant and Refugee issues (ACCMR) of the municipality of Athens.

On October the 4th 2016 a Group of Experts of the Convention for Action against Trafficking in Human Beings (GRETA) of the Council of Europe, visited EKA in the framework of the assessment of the implementation of the respective Convention in our country.

The GRETA delegation consisted of experts Ryszard Piotrowicz and Rita Theodorou Superman, the Executive Secretary of the Convention Petya Nestorova and the Administrator Markus Lehner. From EKA participated in the meeting the President George Mylonas, the General Secretary Kostas Koulouris, the Head of International Relations Christina Theochari and the Head of Immigrants’ Office Vania Nedelcheva. In the meeting, EKA presented its activities and experiences in the area of immigrants’ issues and particularly labor trafficking.

At the event participated 21 women  from Nigeria, Ghana, Sri Lanka, Cameroon and other countries of Africa and Asia as well as organizations' employees. There was a discussion on labor and social security rights of domestic workers in Greece, the demands and the latest changes in legislation.